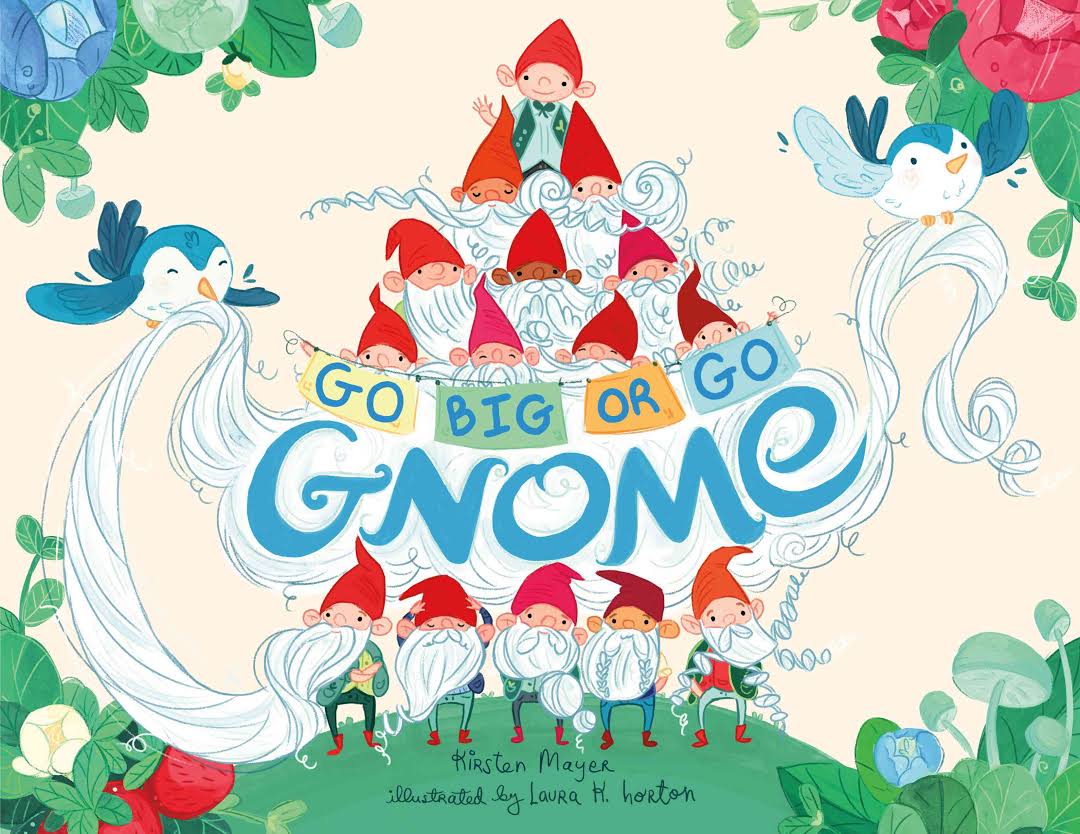 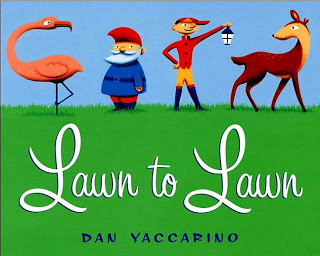 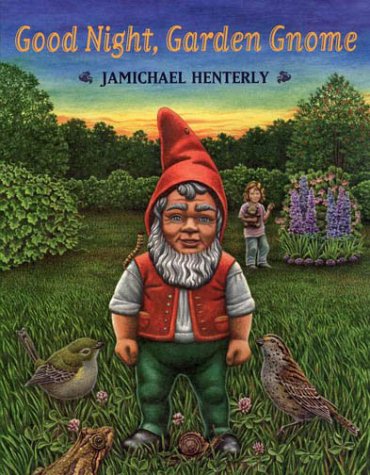 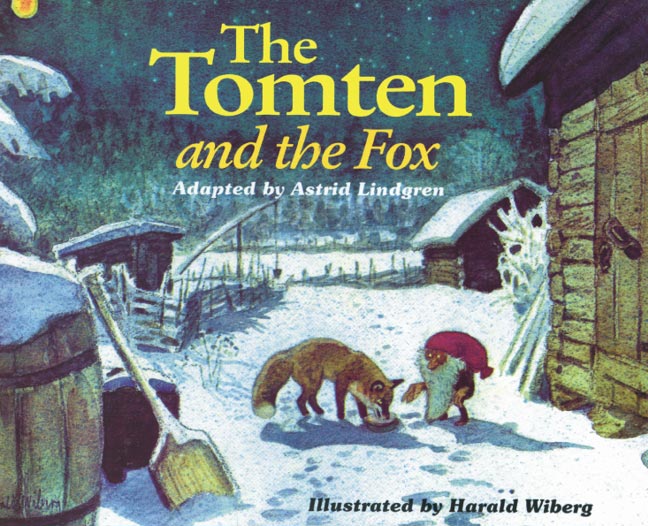 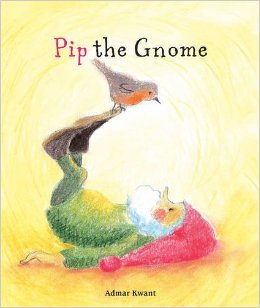 Go Big or Go Gnome by Kirsten Mayer
No, No. Gnome by Ashlyn Anstee
Lawn to Lawn by Dan Yaccarino
Good Night, Garden Gnome by Jamichael Henterly
The Tomten and the Fox by Astrid Lindgren
Pip the Gnome by Admar Kwant

We didn't actually have all of these books at my library. I bought a copy of Pip the Gnome specifically for this storytime and my personal collection at home because I love gnomes! I ended up using it for the toddler storytime, so I'm glad I had it! If you like to use music from CDs or videos with your storytimes, definitely consider using Emily Arrow's "No, No Gnome" song along with the book!


I was so exciting for this storytime that I even dressed up for it both times I ran it, with different gnome themed dresses each time! I dress up for storyimes when I can. I should really try to get more pictures of that since that is what the "lookbook" part of my blog title was supposed to be.

With the exception of "The Gnome Song," which is a Waldorf song I found on YouTube, I wrote and adapted these all myself since there are not many gnome songs and rhymes out there!

These are Little Gnome’s glasses,
(make circles around each eye with fingers)
This is Little Gnome’s hat,
(make a triangle shape with hands above head)
This is the way he folds his hands,
(fold hands)
And lays them in his lap.
(sit and lay hands in lap)

I had a bunch of ideas for potential flannelboards, but obviously I didn't get to use them all. For one thing, I didn't have time to make that many things! I really want to make a gnome in the home board and gnome finger puppets for something in the future though! 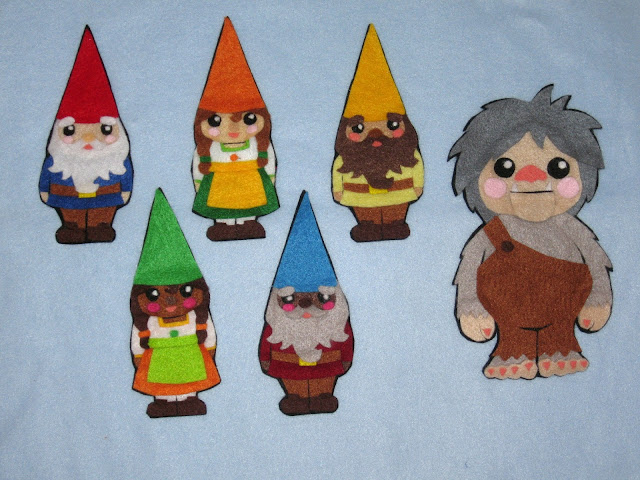 One little garden gnome dancing in the dew,
Along came another and then there were…two!

Two little garden gnomes skipping through the trees,
Along came another and then there were…three!

Three little garden gnomes doing all their chores,
Along came another and then there were…four!

Four little garden gnomes helping the plants thrive,
Along came another and then there were…five!

Five little garden gnomes, having so much fun!
Along came a troll and away they all run!


Five small and cheerful gnomes,
Far from their cheerful homes,
Looking for a delightful time. (Hooray!)
One saw a field of flowers,
Frolicked in it for hours.
Now there are four small, cheerful gnomes!

Four small and cheerful gnomes,
Far from their cheerful homes,
Looking for a delightful time. (Hooray!)
A pond lay just off their path,
One stopped to take a bath.
Now there are three small, cheerful gnomes!

Three small and cheerful gnomes,
Far from their cheerful homes,
Looking for a delightful time. (Hooray!)
One met some elves by chance,
They said, “Come join our dance!”
Now there are two small, cheerful gnomes!

Two small and cheerful gnomes,
Far from their cheerful homes,
Looking for a delightful time. (Hooray!)
One found some berries sweet,
She took a break to eat.
Now there is one small, cheerful gnome!

One small and cheerful gnome,
Far from his cheerful home,
Looking for a delightful time. (Hooray!)
He met a swift red fox,
They raced down to some rocks,
Now there are no small, cheerful gnomes.

No small and cheerful gnomes,
Far from their cheerful homes,
They all found delightful times. (Hooray!)
We hope they come back one day,
So we can sing and play,
With the five small, cheerful gnomes!


Flannelboard: “Gnome in the Home”

Just like mouse in the house, but with a cute gnome in forest themed homes instead. Unfortunately, I did not have time to make this flannelbaord with how much time I spent on the other one, but I hope to make it for a future storytime if I can find a theme that fits! 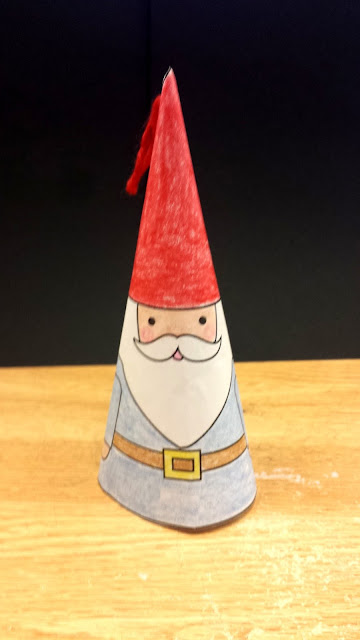 These cute little gnomes are just cones of paper. Kids can color them however they want and caregivers can help cut and glue them together. I added a loop of string to the top to hang it up if desired.

Please feel free to download the PDF for this craft! It prints out a little small on 8.5x11 paper so I would suggest enlarging it to 150% and printing on 11x17 paper instead!